Everything Depends On the Side String

Gliders generally don’t have stall warning systems, even though they could do with one as soaring is done frequently close to stall speed. Because airspeed is only one condition indicating stall (vertical acceleration plays a role too), it makes sense to measure the angle of attack. It is amazing, how little a ‘stall’ string features in most text books, let alone mention or description. 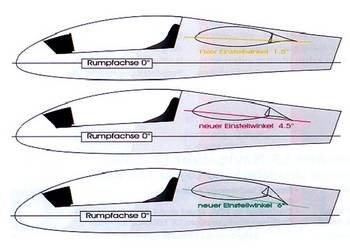 The angle of attack is quite easily done with a string. It should be approximately 30 cm long and is taped to the left side of the canopy, about 5 cm above the canopy rail. If the position of the string is marked at best L/D speed, it provides a clear indication of the angle of attack during thermalling, winch launch and positioning of flaps. The advantage:

The string always shows the current angle of attack, under the inclusion of all parameters like air speed, all up weight, acceleration due to turning or stick movements and gusts. If the entire range of airflow separation is marked additionally the pilot has an excellent stall warning device at his disposal, the function of which is described below in detail.

What is the Side String? 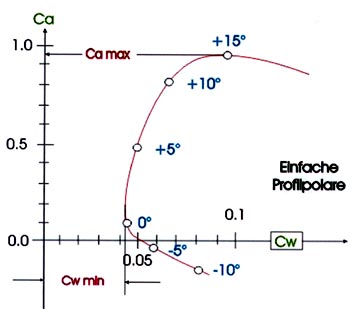 The side string, attached to the side of the canopy, shows the current angle the airflow assumes at the profile nose radius in relation to the airfoil chord. It is indeed a universal angle of attack indicator. The angle of attack can change continuously due to internal factors (pilot input) or external factors, i.e. vertical and horizontal air movements. Piloting an aircraft is a constant control loop between internal and external effects to achieve stationary flight. This goes for all flying conditions, be it straight and level flight or turning, winch launch, during landing, at all wing loadings and altitudes as well.

It is just the same valid for borderline cases like too slow or fast.

Fly too slow and the glider falls from the sky and crashes, too fast and the aircraft disintegrates in mid air.

The normal range for most airfoils is from +15 degree to -5 degree, measured between the airfoil chord and airflow direction. During inverted flight it can reach -10 degree (see also Liienthal polar diagram)

What can the side string do?

It delivers information about the current situation of the aircraft. If I remain always in the functional range of the angle of attack, the aircraft will not crash. It supplies good information, which the pilot needs to interpret. The side string can do a lot, the pilot however must come to the correct conclusions and act accordingly.

What is the side string good for?

The above only works if I notice and correctly interpret the side string and apply the right corrective action. Thereby the pilot determines the usefulness of the side string.

Where does it belong?

It must be in the visual range on the outside of the canopy. It can be tested already during the first flight after calibration.

Ideally it would be best places on the longitudinal axis of the glider which is possible on very big canopies only; it must after all remain visible. A good spot is about 30 cm ahead of the clear view. This way it can be untangled if needed. The range marked inside should not be forgotten as this will aid recognition of impending danger.

The procedural description of a lift indicator (angle of attack indicator) can be found in Helmut Reichmann’s “Cross Country Soaring” on pages 205 and 186 as picture in the 5th edition of 1982 as well as in all other editions of the book, albeit on different pages. What is now the use of this ‘Angle of Attack indicators?

It is the clear, early recognition detection of undesirable aerodynamic control habits and indication of the danger zone of stall.  Correctly applied the angle if attack indicator will aid performance soaring, should be a permanent component of training and not be absent from any training glider.

For the Test Pilot

The side string works independent of position and mass. Therefore the errors described in Reichmann’s book don’t exist. The biggest benefit lies in the early detection of flow separation in all positions and altitudes, may it be during winch launch or with high wing loading, during turning or round out or with bug infested wings or rain as well as all flap setting. Flow separation is at the same point with all flap settings, only the air speed is different

Thus the lift indicator (angle of attack indicator) is not a new invention but the simplification of the still valid tube system to the simple string indicator at the canopy in view of the pilot. For everybody: Early detection means: If I continue to do what I’m doing the aircraft will stall. The side string therefore shows directly the mistakes I’m about to make. It is thus an optical stall warning and shows the impending stall before it occurs. It will happen if I ignore the warning of the side string.

For the Cross Country Pilot

For gliders with flaps the side string furthermore shows wrong flap setting during cruise. There is more than optimal drag, If the string is not positioned on the best glide line. I have to reduce speed or correct the flap setting.

Thermalling can be done, depending on the structure of the thermal, with max lift or min sink. As long as I keep the string below the hatched area there will be no stall as flow separation could lead to an incipient spin and always results in reduced lift.

For the Trainee and the Experienced  Pilot

In this case the side string is an aid to control the climb angle during winch launch. When utilising maximum lift in this instance (not max angle of attack) the launch is optimized and one reaches unusual altitude. Flying without instruments can be exercised really good too. The safe region moves down by about 2 to 5 degree with rain or bug affected airfoils. An additional red line could be added to the canopy. In this case the same is true: If I keep the string always clearly below the hatched area I will not cause flow separation which could lead to an incipient spin, always results in less than optimal climb and is extremely dangerous during winch launch. There is one disadvantage: Extreme yaw angles will falsify the indication of the safe range positively or negatively depending on direction of yaw. The angle of attack does not change. If the side string is fitted to the right side of the canopy and I yaw left, the string will show flow separation too late. A more or less pronounced downward yaw flow in the area of the side string will develop in this example. The error will be smallest in the area of best glide and biggest close to flow separation. A cure would be strings on either side of the cockpit and interpolate accordingly or to prevent yaw.

Note: The speed information shown in the picture are for orientation and better understanding only and are to be used for calibration in straight and level flight. They should not be put onto the canopy under any circumstances.

The 5 degree line is the recommended angle of attack for final. It could as well be the yellow triangle and represents best sink as well. An approximate reading is sufficient for optimization and orientation. The truth always is: Just about right is better than exactly wrong. 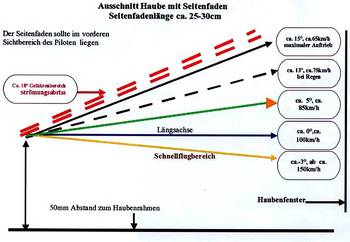 Glider with 70 to 90 kg pilot weight, no water ballast. Stick the 25 to 30 cm woolen string to the outside of the canopy in view of the pilot. Fly close to stall speed (acc. Flight manual, as a rule 35 to 38 kt). Just before reaching the pre-stall buffet, mark the end of the string on the inside of the canopy, preferably an adhesive arrow. Now fly speed of best glide (again fro the flight manual, usually 54 – 59 kt and mark end of string with arrow again.

Next the landing approach speed (Fro the manual to, usually 43 to 46 kt) and mark with adhesive arrow. Last fly rough air speed taken from the manual (81 to 97 kt) and set the mark at the end of the string. When all done draw the lines of the graph on the inside of the canopy with waterproof ink after landing.

Due to the magnifying glass effect of the fuselage airflow the side string angle indication is bigger than the angle of attack of the wing. That can be as much as 50 % more. Therefore please do not mark the graphic with a protractor.

And now have fun with the evaluation of the technical basics, the practical experimentation and furthermore handing on of this terrific safety indicators to the well and not so well disposed fellow glider pilot. 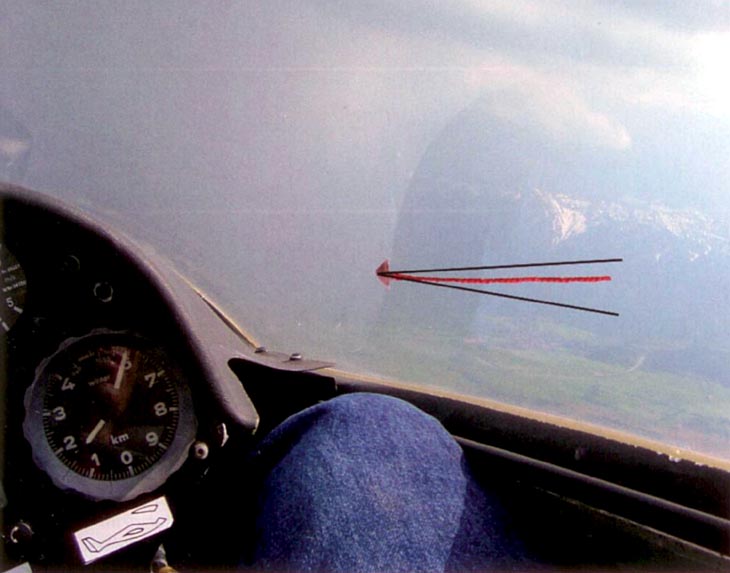