Of Pressure and Probes

Of Pressure and Probes

“The precision of today’s soaring computers is so great that erroneous indications are almost always caused by incorrect pressure readings. The precision of the read-out is a function of the accuracy of the probe pressure.”
This quote is from a well known manufacturer of  soaring computers and should serve to call particular attention to this subject. The correct installation of the pressure source and the correct connection of the computer is  almost a science in itself.
You know that there are basically three pressure source positions in a sailplane:

The most sensitive and most difficult to attain is, surprisingly, the static pressure source. It’s not enough for instance to just read the pressure in the cockpit. One only has to open the ventilation or the slide window to produce considerable pressure variations.
The designer has to seek, and test, positions on the fuselage where the pressure from in front and the suction of the passing air stream are equal. You will see these points marked by little red dots and the small hole in the middle must not be plugged.
The connection of several instruments to one port can lead to erroneous readings. If a static port connects to the altimeter, also to the computer and, by pneumatic switch, to the vario, then the possibility exists that small leaks in the system will give wrong readings. This is why a sailplane should have at least two static ports so that instrument connections can be separated.
The pressure readings are usually taken from the nose and the static pressure from the fuselage side. The probe is usually located in the vertical tail fin. A long tube facing forward should avoid interference from the rudder. If the probe slot is in only one side of the tube, that side should face up to avoid turbulence from the wings.

There are also multi-function probes that combine static, pressure and vario ports and need an adapter that connects the three tubes to the instrument panel – it’s usually called a “Prandtl-M-Probe with Prandtl-M-Adapter”.
The most ideal location for such a probe would be well in front of the sailplane nose out of any turbulence generated by the sailplane. Unfortunately, such a tube would not last very long. In the start line a helper goes past in front and ………

That is why pitot tubes are located in the vertical fin. And to ensure that such a multi-function tube can be used almost all DG sailplanes have a Prandtl-M-Adapter included as standard equipment. 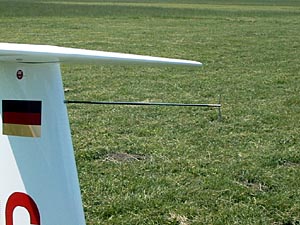 Motor sailplanes such as DG-808C etc. need a different solution. The propeller turbulence in motorized flight would render the readings useless and might even damage the instruments. That is why the vario is switched by pneumatic switch from the aft probe to the front static port and one does without compensation for the time being. That is also why the DG-808C has two static ports in front so that all instruments can be connected.
It is important to remember that in DG single seat sailplanes the static port is always the most forward hole in order to get precise air speed readings. The more rearward hole is intended for the connection of the vario, altimeter etc.