Safety Paint on our Sailplanes

For improved visibility it is recommended that the sailplane is painted as noticeable as possible.
Unfortunately dark colors have the undesirable characteristic that they heat up enormously in the hot summer months. The greatly increased temperature decreases the strength of the material.
To provide universally applicable guidelines as to which parts of a sailplane can be painted, Wilhelm Dirks has issued aService-Info, which is also of interest to many owners and repair shops:

That is the “official” position of the manufacturer

I have not been able to find a study of the differences in visibility of sailplanes with or without such paint.
Has anyone seen such a study?

I had the personal experience in fairly poor visibility to meet a two seater almost head-on that I recognized only clearly after seeing two stripes of reflective foil on the leading edges of the sailplane.
In southern France they attach bright red reflective foil to may airplanes, such as is used on military jets. This is not permissible according to the above standard . But because the sun is not as strong in the spring and the foil itself provides some insulation this practice may be acceptable.

Please remember that a manufacturer must base his recommendations on extreme conditions which could arise when a sailplanes sits in the sun in Namibia and the pilot then executes an overly stressful winch launch.
The best paint would be daylight reflective paint such as a reflecting red. But to paint this on is more difficult and so more expensive than regular red.

And please remember that only an authorized shop can install safety warning paint and has to be checked out by an licensed inspector. The rudder is especially sensitive to increase weight due to the extra paint. It could cause flutter.

We received news from Austria that it is planned to make safety paint mandatory even in regional contests to improve the visibility of sailplanes They also provide a sketch on how to install the paint.

Wilhelm Dirks has replied to this news as follows:

The U.S. Department Of Defense did work on this topic years ago.  I’m not sure where you’ll find it — perhaps on NASA, Navy, or Air Force public web pages.

One finding that I have heard is that darker coloring of the extremities of the aircraft can actually make it harder to see at a distance.
Apparently it has an effect of shortening the apparent size of the aircraft.

Thanks for your newsletters,

After the report that came out from Austria, we wanted more exact data and knowledge about the subject. Therefore we decided to make a scientific investigation of the thesis. We made large sheets of sandwich material of the type used for wing skins. These sheets were divided into squares which were painted with different colors. The panels were laid out in direct summer sunshine and the temperatures were measured between the outside glass layer and the CFK layer with NiCrNi junctions.

Here is a summary of the results which are, of course, not specific to DG but would apply to all sailplanes. It must be said in advance that in the certification process, the material must have a specified strength at a temperature of 129 deg F.  (54 deg C)

The next thing to do was go through the measurements of the other colors.
Using our previous setup, which achieved a temperature of 111 deg F (44 deg C) under white paint, the highest temperature among all of our test panels, the classic red warning paint, warmed up to 147 deg F. (64 deg C)  That was 36 deg F (20 deg C) more than the white patch!

Much less warmer were the daylight colors “Yellow-Orange”.  The surface stayed about one degree cooler under the same colors which were not painted on, rather applied as foils.
Using a mirror finish like aluminum foil resulted in a cooling by one degree.

The results were not a surprise.  The more the absorption of the heat of the sun’s rays, the hotter the surface became.  What is the practical result of this test?

During our spectacular destruction test of the DG-1000 wing the outer wing section survived more or less undamaged. What do you do with it? It is too precious to be binned, but you can’t use it for flying either.

Wilhelm Dirks built another test bed and strapped the outer wing into it in a similar way as had been done with the main wing in Stuttgart. There were two main differences, though: Of course the loads were a lot smaller than in Stuttgart, and the outer wing had been heated to 71°C in the temper chamber. What we wanted to find out was the effect of a temperature increase beyond the maximum allowed temperature on the structural integrity of the wing.

At a temperature of more than the certified 54 °C the integrity of the resin is rapidly reduced.
Therefore one must never apply a color scheme to structural parts that will overheat them.

Do Gliders Always Have To Be White?

We have explained above why gliders are white. People might want to paint them not for safety reasons but purely for design purposes.
Do we really want that? The safety aspect would then be an added bonus, so to speak.

One could ask what all those Para gliders and hang gliders would look like if they were all white. Wouldn’t that look absolutely horrible?
W. Dirks replied to that:

You are right to question the looks of Para gliders and hang gliders if they were white – that would be unbearable. You see, those gliders are really ugly to start with, and only the multicolored fabric makes them look halfway decent.
This is completely different, however, if we talk about modern glass gliders. I am convinced that there is no other thing made by man that comes anywhere near the elegance of a modern glider. Don’t you agree? This is why most color schemes on gliders don’t do anything to improve their design.
What I’m trying to say it that a glider looks elegant and beautiful due to its form – just like a beautiful race horse. Or would anyone want to paint a race horse in wacky colors?!
Incidentally I did over 1000 km on the ridge of the Odenwald in such a beautiful thing last Sunday.

One opinion. And probable not entirely wrong.

But is that really all there is to say?
Why shouldn’t we think about whether we can do it differently?
Of course you don’t have to paint the whole glider (within the allowed limits) in bright green and pink.

What do you think of this, for example?
A nice example which does not exceed the limits.

Just to summarize the above: 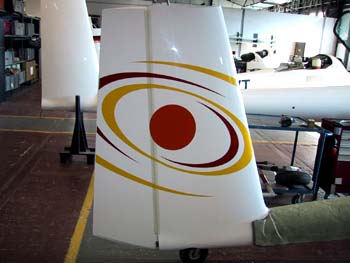 The fin in particular can be beautifully painted if you don’t need it for a competition number. – And even then you could stick the number on just for competitions and take it off again after the competition. Of course this would only be practicable for the occasional comp pilot.

You can apply color schemes to the following glider parts: all surfaces of the fuselage except the top of the fuselage to approx. 50° to the left and right of the center line, the undersides of wings and tail plane, the winglets and the upper sides of the wing tips. If you use light colors that fade towards the “forbidden” zone you can do quite a lot.

We offer each potential buyer of a DG-800 the opportunity of having the glider painted according to your own design. Our painters will use your design to make a quote of the cost involved.

Here is a nice example of the “Luftsport-Verband Bayern – LVB -” for their new DG-1000S. The aircraft with the fin in Airbrush-Technique was handed out by Holger Back: 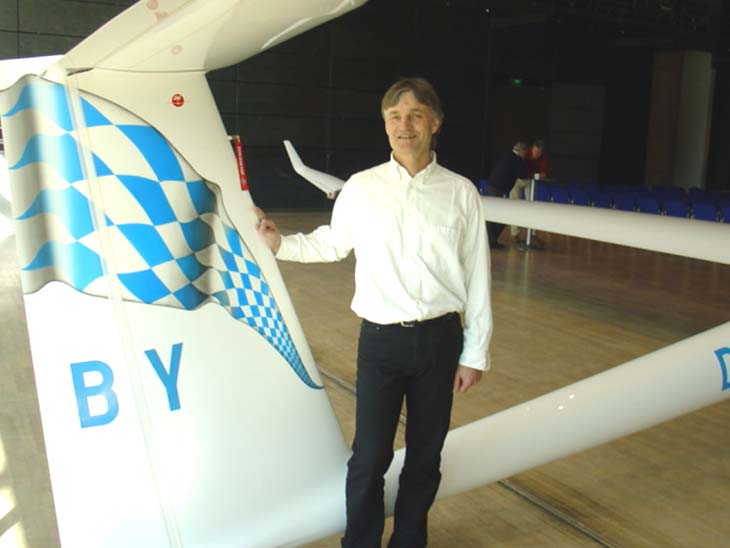 ….and here is another example designed by Gregor Gaida. Comment of our workers:

“A DG Worker does not fear anything and anybody!” 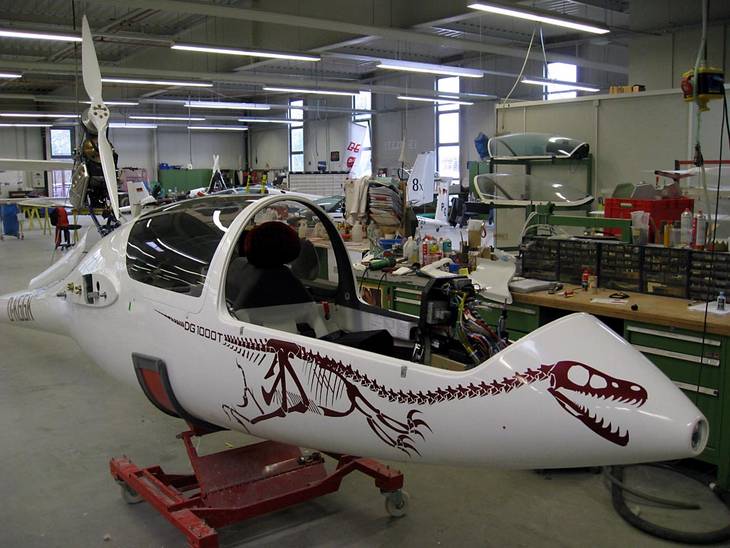 And here are some alternatives.
These are proposals only. If you want, you also can design an own painting, which you want to be sprayed on your new glider.

Do you have some design capabilities? Are you able to handle a photo-editing program? Then please do not hesitate to make your own drafts. The best will be published here!