When I first received the great news, that after winning  OLC’s Young-Eagle-Speed-Cup in 2017 I would be invited to fly the LS1-f neo for one year, it took me only a few seconds to plan my next soaring season. I would begin it in France, then check out April showers in the Luneburg Heath, D-Cadre training, qualification contest, and last but not least enjoy the rest of the summer…. 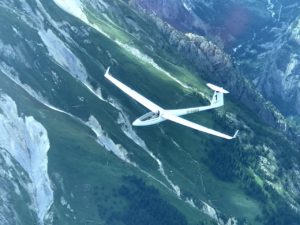 My first flights of this season in France were fantastic; you may have noticed my first report in DG’s news section. Afterwards my season should go on with crispy cold air in Germany’s North – but dream on… When I returned home, 25 degrees Celsius and clear blue skies were the normal daily conditions. The weather gods had decided to

skip spring and we had to directly switch to summer. However, some awesome flights were well possible.

Next, I had a training camp in Oppershausen on my bucket list. A very well organized week of soaring, with cross countries in diverse weather conditions. Here I learned that the LS1-f neo with her winglets was obviously flying much better especially in turbulent thermals than her sister “f” without winglets. 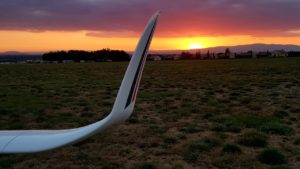 Unfortunately I could not participate in the qualification contest as I had intended, and I had to change my plans for the rest of the season as well. So finally I decided to travel to Puimoisson and pull together as many hours of flying as possible before job duties or private commitments could get into my way. Aside from some minor technical issues it became quite an amazing vacation. Low hanging clouds over the Parcours on every day and sometimes difficult conditions in the North made all my flights very exciting.

Finally, after about some 120 hours in the „1neo“, I had to drive back home where I deposited the glider at DG Flugzeugbau. The next few weeks Timo Mayr and Joshua Rieger will be flying it, so the LS1-f neo may demonstrate its full performance during contests. I whish them a great time with the sailplane and would like say a big Thank You to DG Flugzeugbau and the OLC for inviting me to fly such a wonderful ship!